So, the risks I took, women take, when traveling alone. In my previous post, I described shacking up with two strange men on my first night in Bangkok. A day or so later, I got in touch with my friend Jillana, who was living there, and I crashed at her apartment and let her show me around. That made the transition to the foreign culture enormously easier, but I had to come out from under her wing eventually, and in preparation I read again and again the list of tips for solo women travelers that appeared in the guide books: Choose accommodations where other women are staying; do not stay in brothels; inspect walls for peepholes; make sure make sure doors lock from the inside; avoid being alone with men; stick to well-traveled, well-lighted areas. When I finally set out by myself for Ayutthaya, an old capital of Thailand that was a well-worn stop on the beaten path of every conceivable tourist type, I was suitably terrified. How could I remember everything? Who would have thought to look for peepholes? That first day on the trail alone was one of the longest, most intense days of my life. (The internet has made prepping for solo traveling a little less intimidating. These tips from Journeywoman for women traveling solo seem useful and realistic.)

The minute I got off the train, it became clear that the tips for solo women travelers could not be followed to the letter: Tuk-tuk drivers swarmed me, and they were all men, and I was going to have to be alone with one of them if I were to get to the guest house that Jillana had recommended to me. Part of the recommendation was to be firm with the driver about being taken to the old BJ Guesthouse and not the new BJ Guesthouse, which was known to be of lesser quality, and although I tried, I was pretty sure I had been deposited at the undesirable location. Jillana had told me this might happen, and that if so, I was to march back to the tuk-tuk driver and demand to be taken to the alternative, but this kind of assertiveness was beyond me. It was all I could manage to ask to see the room before I rented it, but with the proprietress standing at the threshold and insisting she could get the best rate for me on a tuk-tuk and guide to the ruins, my inspection was cursory, and it did not include the shared showers— peephole-potential central, according to the guidebooks. And so I started off feeling inadequate to the wiles of the locals and to the dictates of the safe solo-traveler advice, and I valiantly vowed to do better next time without having a clue about how that would be possible. 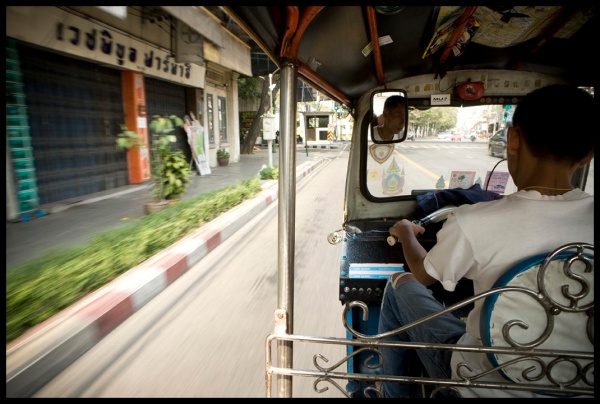 I had taken a seat in the near-empty guesthouse courtyard and was studying a map of the Ayutthaya’s famed ruins when a teenaged girl introduced herself. “My name is Noi,” she almost whispered, and her eyes were questioning but intent. She looked Asian but not typically Thai, with hair almost as short as mine and black-rimmed round glasses, and her story, told in halting English, was unclear. Perhaps she was a Thai student being educated in Japan, here on holiday? In any case, she was staying at the guesthouse in some capacity, and she shyly asked me if I wanted to do something with her that afternoon. What could I say? No? And anyway, maybe it would be some comfort to have a companion, even if it was a rather strange one. I told her I was planning to walk to the ruins. The guidebooks had said most of them could be visited by bicycle (when I had inquired about rentals, the proprietress told there were none available that day and once again urged on a tuk-tuk) and so I figured a fair number of them could be reached by foot, as well.

Noi requested that I wait for her while she went to the bank. When she came back, she said the bank was closed because it was a holiday, and she asked me if I would loan her money, naming a sum higher than my daily budget. I furrowed my brow and tried to ask questions in the place of offering money. What did she need it for? What did she owe the guesthouse? I felt a combination of motherly concern and suspicion; clearly she was trying to bilk the farang, and my intended companion, instead of providing some level of safety, was someone of whom to be wary. But she also seemed so young and confused. I didn’t give her cash, but I didn’t refuse her company when she said she still wanted to go with me, and we set off walking down the road under the flat, hot sun.

Within minutes, a tuk-tuk buzzed up from behind us and the driver called out, asking if he could be my guide. I rebuffed him, but another one approached, then another, then another. To extend their solicitation, the drivers slowed their exhaust-belching carts to our pace as we strode along; they offered prices, asked what price would I pay, insisted that I would never be able to see the ruins on my own. They just generally resisted taking no for an answer. But I refused and refused and refused again, my determination to go it alone only increasing the longer and hotter and more annoying the walk got. The guidebook said most of the ruins were available by bike! At least some of them must be available by foot! I would not be tricked again! The men sometimes tossed a few Thai phrases at Noi, who would whisper-answer back and shrug her shoulders, looking helpless and perplexed. Finally, we entered the national park and saw some ruins, and my mind was blown by the Indiana-Jonesish visages before me, the giant Buddha heads and stuppas, sites I had no cultural connection to and very little context for and whose exoticism was sharpened by how hard-won it had been to see them independently. But Noi was unimpressed. While I tried to open my soul to the object of the day’s considerable efforts (this is why I was here, right? right? Face to face with it, I was supposed to feel something profound.) she wanted to talk about boys, about the Japanese boy who had disappointed her, about a cute boy staying at BJ Guesthouse, about another boy who had used the word penetration—what did that word mean? At the end of the afternoon, I was exhausted.

Imagine my dismay when I returned to the guesthouse and saw every tout who had solicited me sitting in the courtyard having their happy-hour beers. There were at least a dozen guys there. The new BJ Guesthouse was the tuk-tuk driver headquarters! No wonder I’d been funneled there in the first place. No wonder they hadn’t wanted to rent me a bike. And no, I couldn’t slip to my room unnoticed. The men immediately called out to me: “The girl who want to go by walking!” They smiled and laughed, held open their palms and stepped their fingers across them to show my insistence at walking. They spoke to Noi in Thai, and she spoke back, and I looked at her, looked at them, didn’t know if anyone was on my side. There were maybe two other farangs in the courtyard, a couple, let’s say, who sat knee to knee at a small table with postcards spread between them. I wanted to catch their eye, but they took no notice of me or of the tuk-tuk drivers. Nor would I or the tuk-tuk drivers have felt free to approach them. For better and for worse, when you travel as a couple, you’re traveling in a turtle shell; when you travel alone, your whole self is out there in the world.

So there I was. Alone. Out in the world. Maybe 8 feet away from a table full of men drinking beer. Alone anywhere, I would certainly try to avoid a group of drinking men. Especially when the men can speak to each other in a language I don’t understand. Especially when they’ve already colluded against me. But they seemed so genuinely good-natured, both in their volleying between each other and in their comments to me. I cracked a smile. I replied to a question. I sank into a chair and replied to another. One by one, the drivers handed rolls of baht to a more thick-set man in a much whiter shirt who was buying the beer. “I pay my boss!” one guy explained cheerfully. There was a palpable sense that they were off the clock, that their work of trying to sell me services was over, as was my work of resisting, and that now—of course! finally!— we could all sit back and relax together. After hours of keeping my defenses up high as they could go—standing on tiptoe to do it, then hauling in iron scaffolding—they started to slip. And I can’t remember exactly how it happened, how many gently teasing comments the guys tossed my way, how many invitations were issued before I took them up on it, but Noi and I eventually joined the men at their table. I even accepted a glass from them, and l let it be filled with beer from one of the big Singha bottles they were sharing. And I started to differentiate, to pick out the guys who were cute, to pick out the cutest one, to see that he was actually turn-the-knife handsome— burnished skin over high cheekbones, thick lock of hair slipping over one of his bright eyes, brilliant white smile—and that he was smiling especially warmly at me. But, recalling again guidebook warnings, I was still wary enough to make sure that others were sipping the beer poured from the same bottle that mine was. I had willingly joined a group— I maybe flirting with one of its members—consisting of people who I believed might possibly drug my drink.

I see that this post is getting long, and I’ve still not gotten to the meat of it. I’ve tried to write about this day before, but the details are so many, and they all seem so important, even as I doubt they’re interesting for anyone but me.

But for me, they are endlessly interesting. They retain a pull as deep as the memories of childhood. Within a week or so after the events I’m describing, I had gotten my traveler’s schtick down. I’d already learned some tricks and shortcuts and gotten hip to the attitudes copped by fellow-travelers, and I’d gleaned that it’d be considered uncool to admit to being as freaked as I was in a place as well-tromped as Ayutthaya—in a garden-variety destination like Thailand, no less, an “easy” country people stopped over in to recover from more arduous destinations—Cambodia, Pakistan. But, far now from the traveler’s snobbery found in the common areas of word-of-mouth guesthouses, willing to risk accusations of traveling the world only in order to navel-gaze, I can recognize that those first days of traveling alone in Asia cracked open my self in a way that seldom happens in adulthood. They changed me, I think. They formed something in me. Or at least they helped me recognize—slowly, part of a process still unfolding—things about myself that otherwise would have remained unknown. And those things have more to do with tuk-tuk drivers than with sites tuk-tuk drivers can take tourists to. Anyway, I haven’t even gotten to the dinner of that first night, yet. Sometime. Sometime. Time. Maybe soon.

← Lucky? And/or smart? Solo Women and Safety
In Which I Consider Thai Prophylactics →