My History with Heroines

This past Thursday, at the invitation of SheWrites co-creator Deborah Siegel, I appeared at Women and Children First bookstore along with Teri Coyne, Audrey Niffenegger, Amina Gautier, and Emily Gray Tedrowe as part of a panel exploring modern-day heroines. I could diagram that sentence to show about twenty different sources of personal gratification: Women and Children First, where I spent many longing hours in the first years of my life in Chicago; SheWrites, a powerhouse site with an international membership; “at the invitation of,” which means I’m acknowledged as a real author by real authors, etcetera. (It seems a little uncool to be geeking out about my excitement, but one of the good things about publishing a novel in my forties after years of aspiring to it is that, although I have a lingering need to acknowledge my awareness of the uncoolness, I’m pretty genuinely OK with it.) To top it all off, the question the panel posed was Why Can’t Our Heroes Be Heroines?, a query that’s resonated with me for seemingly ever.

Thinking about what I wanted to say about heroines, I stumbled upon a dusty but distinct memory of standing in front of the biography section at my school’s library searching the spines and covers for a book with a female subject. It was the mid-1970s in Meadville, Pennsylvania, and I was in the third grade. We’d had a couple introductory visits to the library, but this was the first time that we could check out a book, and I was breathless and almost panicky with excitement. The librarian had probably lectured us on the import of this event for many minutes previous, exhorting us that the books we checked out were our responsibility, that’d we lose our privilege if we weren’t mature enough to care for them well. I’m sure I would have been sitting up ramrod straight through the whole speech, quivering with readiness to defend with my life any book I might choose. I was a good girl, at that point. I was passionate about following directions. If I recall, I had headed to the biographies at my mom’s suggestion, made on the eve of the big day.

But there I still was in the stacks, undecided and confused at feeling slightly let-down, when the librarian started urging us to make our choices because it was time to check-out. Not having found what I was looking for, my state of almost-panic crystallized into the pure form. When she urged us again, sternly–if we wanted to check out a book, we had to get in line NOW—I grabbed the only tome that looked like it had potential, a red cloth-bound hardback with a silk-screened silhouette on the cover in lieu of a title. The figure squinting off toward a distant shore had an undeniably masculine profile, yes, but the fancy hat and poufy costume allowed me to convince myself the person’s gender was indeterminate. Maybe I was holding a book about a strong-jawed, sea-faring lady.

The self-deception could only be maintained for a few minutes. Standing in line to get my book thumped, I turned to the title page and saw I had chosen a volume about William Penn. (In that author’s telling, not such an interesting character.) The next week, not giving up on biographies, I again followed my mom’s suggestion and told the librarian what I was looking for: something about a girl. She showed me the three biographies of women in the library’s collection: Betsy Ross, Florence Nightingale, and Molly Pitcher. That was it. In a few weeks, I read them all. Molly Pitcher was my favorite. She had fought like a man! But only in the stead of her husband.

I’m not saying that those of us who grew up in the 70s were devoid of female heroines. Women’s lib was affecting pop culture even if it wasn’t yet hitting my ill-funded elementary library. Girls like me had Sabrina in Charlie’s Angels. We had Princess Leia, who really kicked ass in that first Star Wars movie. And, obviously, like the legions before us and since, we had Jo, in Little Women. I must have read that book a dozen times, and every time I felt sick—throw up, take to my bed SICK—when Amy got to go to Europe instead of Jo. It was probably Little Women that put Travel to Europe up high on my list of life goals—I would avenge my heroine!—even as it introduced me to the non-fairy tale ending.

Of course, Jo wasn’t the sole plucky heroine in the children’s fiction section (at least at the public library; the elementary library really had a thin collection). There were other spunky girls in kids literature, too. Lucy, in the Narnia Chronicles, was the first one to walk through the wardrobe. Meg, in AWrinkle In Time, was the one to go rescue her brother. Laura Ingalls was anything but delicate or prissy. But when I was considering what books I might want to mention on the panel, I couldn’t recall finding many independent, self-defining, adventuresses as I moved into adult reading material around junior high. Maybe it’s because I spent a lot of time reading pulp: I was quite familiar with Jacqueline Susan’s oeuvre, for example. I was fascinated by a book called The Mating Dance that featured heaving bodices and S&M-tinged sex. On the other side of the spectrum, it was in high school that I began my life-long love affair with Edith Wharton, but, even if their clothes aren’t falling off at every turn, her characters are all caught in the prison of their gender. Wharton’s books helped me define my nascent feminism, but there was no one I wanted to emulate in those pages. Who I wanted to emulate were the characters in On the Road. That book blew my mind, and I spent hours feverishly underlining the same passages multitudes of other teenagers had feverishly underlined: “The only people for me are the mad ones!” When my father told his editor, Beth Hadas, that I was obsessed with Jack Kerouac, she sent him a book to give to me, Minor Characters, by Joyce Johnson. It was a memoir about the years Johnson spent as Jack Kerouac’s girlfriend during the height of the Beat period, and I was fascinated with it. It was another book that helped me articulate some things I’d only up to then sensed about gender, and probably the first book I read in a genre I’m fond of to this day, what I call “I’m with the band” books, including one by that title. But taken as I was with it, I didn’t want to be Joyce, on the margins, waiting at home. I wanted to be, well, on the road. I wrote in “hitch-hike across the country” under “travel around Europe” to my list of travel dreams. 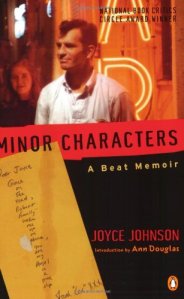 Within just a few years after high school, I had accomplished both those things, but I had felt like I needed a guy to accompany me. It wasn’t until I escaped from that guy in Barcelona and met two different independent women on the way back to England that I began to think I didn’t need male protection, that I could travel by myself. Coincidentally, my friend Sari, was at almost that exact same moment traveling in Egypt alone, and I hung on her words about it when we were roommates that fall. So it was the real women who showed me that I could go to Asia all by myself. And I know that my experience inspired other women I’ve met to not wait around for a companion if they have an itch to move.

There are times now, as a middle-aged person who’s been supporting myself and my family for years and who checks in on a dozen blogs written by women who are independently traveling and working around the world, when concerns about female agency seem dated, at least when it comes to middle-class white Americans, but the SheWrites panel got me back in touch with a wider-lensed view. It also got me thinking again about Robin, the protagonist in Currency. She’s a flawed character who makes some really bad decisions. She does not ultimately triumph. But I admire her willingness to take herself far, to get herself out of Florida, to get herself out of a job that she hated, and all without using her sexuality. I deeply admire her willingness to be for Piv, when she can, the provider, to be the pilot that takes them both to the great beyond. She doesn’t take her place by the red-hot cannon only after her husband gets shot down. She’s out there fighting for herself, on her own behalf. Especially when I was sixteen, or twenty, or twenty-five, it would have meant a lot for me to find a book like the one I wrote. 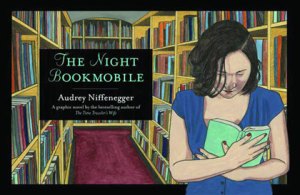 Anyway, it was a pleasure, in preparing for the panel, to think back on my reading history, and it was a lovely synchronicity, after several days of wandering the dusty stacks in my mind, to hear Audrey Niffenegger read the short story upon which her new graphic novel, The Night Bookmobile, is based. It’s a lovely book that will resonate with anyone for whom reading has been important and for anyone who likes to wander dark streets by themselves.

5 Comments on “My History with Heroines”