When I was a very little girl, I used to say I wanted to be a movie star, but by adolescence the idlest whiff of that desire had flown, never to return even while sitting with a drink and watching the Oscars. But this morning I found myself fantasizing about having reason to go up on stage last night, and in the scripted stupid banter which is part of why I have not the slightest interest in being a Hollywood person, I’d say, “Hey Seth, I saw your dick.” And then I’d proceed with some jokes about its small size—that I had had to part his pubic hair to get a look, although actually the last time I saw it he had been waxed, and was that to make his dick appear more prominent? Etcetera. Cut to a reaction shot from Seth. He’d be looking faux horrified and embarrassed. Ha ha ha ha.

What would make the jokes really hilarious is that Seth would know that in fact it was true—that I had seen his dick. That I and a group of other women—maybe a few guys in there too—had managed to convince him one to strip down—for his first feature role, for a role in the kind of film that earns award nominations, for the job of awards-show host, maybe for all three, and that we had seen his trajectory from bush to trim to wax, and that we knew that his dick was in fact exceptionally small. Nonetheless we had cajoled and encouraged and assured him that no, his dick did not look too small but yes, that prosthetic really was the way to go, and that no one would ever know (this based on the vehement claims of a male friend that Mark Walberg had used a prosthetic in Boogie Nights). And it was so important to the project, and he was so great. Wiggle it a little just like that. Oh fabulous. Thank you. Cut.

Now, at this point in the mental movie I’m playing for myself on my sunny walk to work, I’m thinking, “That’s not even funny. Small dick jokes. Jesus. Just lame to mock bodies. Some people really have small dicks, and that must suck in this culture, even if it doesn’t level the playing field of the patriarchy.” Seriously, I thought this. I gave a moment’s consideration to those who might have smaller than average penises, and how my fantasy stand-up routine would make them feel, and about how it fit into the larger culture. But somehow the idea of the unfunny meanness of my fantasy attack fueled me today, and in my mental movie I start going off the script—which up until now has been approved by the Academy— and instead of closing I keep going on and on about Seth MacFarlane’s small dick. In reality, I’ve used up all the small dick jokes I have at my disposal, so the jokes in my mental movie are playing in that Peanut’s adult-speak voice, like “mwwa mwwa mwwa mwwa mwa.” They are cuttingly mean and true and therefore funny despite the exhausted subject matter, or perhaps because of it, or because Seth McFarland’s success makes us all feel a little let down by ourselves. The producers of the show start playing that Jaws music to shut me up, but it can barely be heard above the crowd’s uproarious laughter, some of which is genuine and in celebration of a break-down of the farce and some fueled by fear and shock. Meanwhile, the stage directions have called for Seth to get changed out of his tux into some sort of costume that features maybe a breast plate and a lamé jock-strap contraption, some feathers on his shoes, and he’s standing in the wings in this get-up, ready for his cue. He was supposed to come on stage 72 seconds ago. He has a smile pasted on his now-sweating face, and the Jaws music and cruel laughter are still playing, and then one of the escorts—I noticed last night that they were coed for a change, but in my movie it was a statuesque, young, faux-tanned, faux-blonde woman in a sweeping gown— walks him out to the podium. And everyone would write about it in the morning. The dress I wore, and how well. What luxury corporation made it. How much skin I was showing and whether I’d lost that weight I’d bravely put on for my last role.

The Next Big Thing

I was tagged to participate in the Next Big Thing by my friend, the beautiful writer Sari Wilson. It’s a sort of blog-oriented chain mail where writers ask some other writers to post answers to questions about their current projects, and those writers post and ask more writers, and so on.

Sari’s responses appear on her blog Muttering. Next up will be Laura Bogart, whose fierce nonfiction I have admired on The Nervous Breakdown, Salon, The Rumpus, and elsewhere and whose fiction I look forward to reading. And Eiren Caffall and I have tagged each other. We’re all answering the same set of questions. 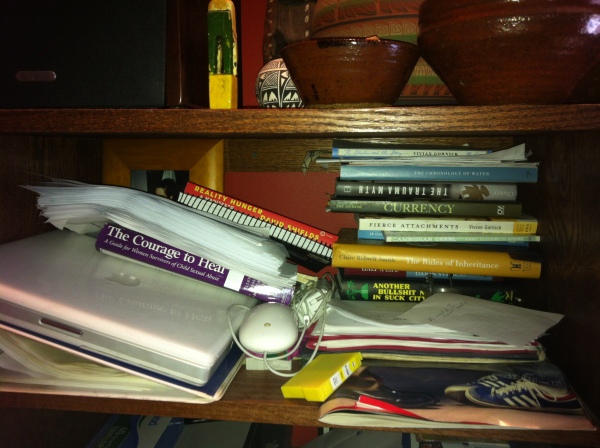 1. What is your working title of your book (or story)?

The first page of my draft consists of a list of potential titles. Right now I’m leaning towards Telling, or In the Telling.

2. Where did the idea come from for the book?

Soon after becoming a parent, my mind and body still reeling from that enormity, I learned that an extended family member was in prison for a crime he committed against a child. This news brought some of my earliest and most distinct memories into new focus, and my brain started to churn.

3. What genre does your book fall under?

4. Which actors would you choose to play your characters in a movie rendition?

Gotta pass on this question. I’m not even good at this game with fiction, and my mind is absolutely blank when the character I’d be casting for is me.

5. What is the one-sentence synopsis of your book?

It’s about the times I’ve told people that I was sexually assaulted as a child, which also becomes a story about family lineage and contemporary parenting.

6. Will your book be self-published or represented by an agency?

There’s a third way: publication by one of the many good indie presses, which often consider unagented manuscripts but give an author some institutional support. That’s how I published my novel, CURRENCY, and the experience was pretty great. I would consider going that route again. But first I suppose I will try to find an agent.

7. How long did it take you to write the first draft of your manuscript?

I’m still working on it, but the end is in sight. I’m thinking I will have spent about 2 to 3 years on the first draft, or first and a half draft, since on a sentence level I revise a lot as I go. I have found my stride, now, but I have a full-time job and two kids, and blocks of time are hard to find.

8. What other books would you compare this story to within your genre?

The book I find myself turning to most often for guidance and inspiration is Fierce Attachments, by Vivian Gornick. I’ve also looked closely at The Chronology of Water by Lidia Yuknavitch, Half a Life by Darin  Strauss, The  Adderall Diaries by Stephen Elliot, and The Rules of Inheritance by Claire Bidwell Smith. These books all have a raw urgency and searching quality to them that I don’t see in most memoirs. They seem very alive to me in a way I hope my book becomes. I’m especially interested  in works where there’s a conversation taking place between a then and a now. Where the story still seems somewhat open and unfolding.

9. Who or what inspired you to write this book?

I don’t know if I’m inspired so much as compelled. I feel a need to make sense of various currents in my life in the best way I know how, which is through writing. And I also feel an urgency about shedding some light on the issue of child sex assault, which both exists in the shadows and in the form of  stock cultural images that don’t always fit the reality experienced by many of us.

10. What else about your book might pique the reader’s interest?

There are some good sex scenes as well as a couple bad ones. (The fact that sex is the first thing that comes to mind when I look at that question is itself a topic explored in the book.) I’m also feeling good about this book as a piece of writing, as a work of literature. However terrified I feel about this exposing personal nonfiction seeing the light of day, I sense I’m on to something, and I’m not letting go.