While Life Do Us Part, by Dara Greenwald

My Aunt Mindy was born to rock, party, and be sick her entire life. 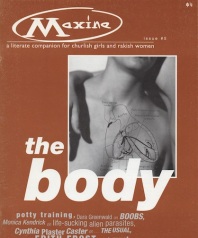 Mindy was born with lupus, a disease which I know very little about, except that it gives you pain and lots of it while it attacks the systems of your body. She had to stay out of the sun and, without a choice, embraced a nocturnal lifestyle. Her childhood photos are often of her in a hospital room.

She was the youngest of the set of three girl siblings, and in the need of the most care. As she got older and remained sick, she lived in my grandmother’s basement apartment—a 70s rehab with fake wood paneling. She introduced me to rock culture subtly, just by living a rock lifestyle.

Fat Freddy’s Cat and the Fabulous Freak Brothers became my childhood comic books. The Rolling Stones and Janis Joplin filled my ears. Longhaired men on motorcycles came to court her. When I was seven she wanted to take me to rock concerts. My mother, with typical worries about my physical safety, would not let me go.

Mindy moved to Madison, Wisconsin sometime during my childhood. There she lived off of SSI in public housing, making extra money by dealing drugs. She spent her nights with a motorcylce gang, the CC Riders. She told me that they just liked to have a good time, make some noise, and donate blood. They were a good group of friends. She spoke slowly in a mellow tone that revealed her connection to our family. She sounded much like her father, my grandfather.

One of the last conversations I had with her was about her then-current boyfriend. She told me she disliked him, but enjoyed the sex. At 5′ 3″ and over 200 pounds, with a debilitating disease, she still managed to find pleasure in sex, drugs, and rock-n-roll. In a country that manages to place moral value on anything you use your body for, she was a transgressive basdass. Witha body that gave her mostly pain, she found a way around it and found joy in her marginalized existence.

In January of 1995, my mom phoned me. Mindy was in the hospital and getting sicker every day. A couple of days later I was told she was unable to talk. Her ribs were collapsing inther her heart. She died shortly thereafter.

My family began fighting over money and things: who would get Mindy’s van and who would pay for the funeral. Although nobody had seen Mindy in years, they decided to fly her body to New York where her remaining biological family still lived. I heard she had wanted to be buried in Madison, where her friends were. Mindy’s boyfriend, a wreck when she died, had said he would come to New York for the funeral, but then he never called again and was unreachable. Was my family who had seen her so so seldom in the last years more entitled to her deceased body, or were her friends, who she chose to spend most of her time with?

We stood in the rain on a late January day, my family in a rare moment of togetherness that only tragedy could bring—all of us in a Jewish plot of the mixed cemetary. A female, freckled, red-headed reformed rabbi sang Jewish prayers that no one in my generation could understand.

Aunt Ruthee arrived from Queens wearing a leopard print cape and black go-go boots, displeased by the sight of a woman rabbi but blessing Hashem for the presence of any rabbi on the alternative side of her crazy family. In pure Jewish aunt drama she sobbed loudly, “Such a young life! Stolen! Ooooooo! Oooooo!” When she stopped sobbing, she needed to to know, “How did they fit her in the casket? She was so big.” She kept asking this question until my mother calmed her down and matter-of-factly explained that they had tilted her to the side. “Oh, they tilted her to the side,” repeated Ruthee blankly.

The funeral—the beautiful blessings of goodness and praise that come with death—continued over this now inanimate body, tilted to the side. Where were those blessings in life when she lived as a deviant? Were people praising her when she felt good, happy, and high? Where was this public honor of her body when it was overweight and diseased, but alive? Some thought she could have lived longer if she had chosen a different lifestyle, but given a body that gave her pain, she chose to do what she wanted.

I don’t usually buy into that old rock & roll credo, “Life fast, die young,” but sometimes it has its rightful place.