I’ve been practicing yoga off and on for over twenty years. When I’m in the zone of a good class, sensory memories of other places I’ve done yoga flow through me: Sheffield, England, where I took my first classes; the beaches of Thailand; the Ayurvedic retreat outside of Katmandu where I submitted to a rigorous treatment; a rooftop in Pokhara; a loft in old-school Wicker Park; a massage room in Andersonville; the airy, urban studio at Yoga Circle; the sun rooms and living rooms and classrooms where I’ve practiced prenatal yoga; the sunny balcony of my mom’s house in New Mexico; the Chicago Cultural Center, where I rediscovered yoga in a life-saving class after an absence; the open-air, rooftop studio on Isla Mujeres enclosed by billowing white sheets. The Isla instructor was German, a traveler, who told stories of Bali, of being stuck in the Sonoran desert while guiding a busload of German tourists. The sheets flapped as we practiced, allowing glimpses of the crystalline Gulf of Mexico, the white tops of buildings, sea gulls mid-flight. I love the way the memories have no age, are not worn. They flutter and billow, like those sheets, tangling into each other, releasing. In the window of the room where I currently attend class, there’s often a slice of blue sky, even in the winter. Sparrows flutter. On good days, my heart fills as I practice. Yoga. Hey, it’s no secret. It’s freaking great. 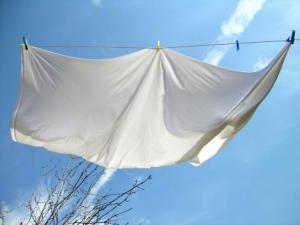 I am especially in love with my Sunday morning Anusara yoga class. Two weeks ago, while I was standing in uttanasana, my teacher, Steve Pizzanello, put his hand on my back and incanted “you’re still traveling, you’re still traveling, you’re still traveling.” He was talking to the class about something specific—maybe that even as we were planted our heads were meant to still be traveling toward the front of the room, our thighs were meant to still be traveling toward the back—but I experienced him as speaking directly to me. Just beneath my skin, there’s often anxiety swirling, a tossing wind caused by conflicting pulls, toward family and stability, toward solitude and movement. Dollar bills are whisking around, and I’m trying to grasp at them, or damning myself for not. But at my core, there’s a calm certainty: I’m still traveling. Of course. Every day, here in Evanston, raising my children with my husband, walking to and from my job, I’m still traveling. It’s one thing. My teacher’s words and my body’s response to them gave me a sail to harness the wind, to move this knowledge beyond my core. It was a powerful moment for me.

If you’re interested in some great writing from a yogi, mother, and writer, I recommend the blog Mothers of Invention.