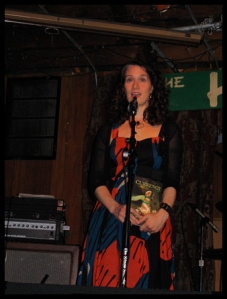 Well, Currency‘s been officially out for a little over six weeks now. I’ve read from it maybe a dozen times in a half-dozen different towns. I’ve gotten some reviews and done some interviews. I’ve been absolutely drunk on the kindness and enthusiasm of friends and acquaintances, and, despite attempts to keep my focus on my many book-related blessings, I’ve also succumbed to moments of despondency over the rest of the world’s utter indifference. (I know, I know, I shouldn’t be comparing myself to anyone. I shouldn’t be checking the Amazon ranking. But, um, I can tell you Currency is at #559,688 as I type. Anyone want to boost my number? From what I can discern, a single purchase vaults it above 100,00 for a day or so.)

Anyway, I thought I’d round up a list of links to some of the press I’ve received, so I have it all in one place.

Gina and I were in the fantastic courtyard of Austin’s boho chic Hotel San Jose when she looked up from her iPhone to tell me that all-round indie-lit star Jonathon Messenger wanted to interview me for TimeOut Chicago, and with the way the sun was hitting the garden’s huge yucca plants, or whatever they were, this probably constitutes my most glamorous author moment yet. I thought the interview turned out well. Here’s a link to it.

And remember when I was so happy when The Chicago Reader ran a good review? Well, I just about cried for joy when I read this one in NewPages, a site that celebrates all things independent in literature. “What follows is a tour de force portrayal by a serious author of the realities of modern-day smuggling and those involved in these activities. Currency not only succeeds in its scope and in-depth research, but also in in its fluid, energetic, and intriguing prose.” I think I’ve discovered my next tattoo. (You have to scroll down to find Currency, but along the way there are lots of intriguing reviews along the way.)

I was also very excited by this review on A Traveler’s Library, because I’ve admired that site for awhile as one of the few that combines a literary aesthetic with a focus on travel. Writer Vera Marie Badertscher says, “I would call it a good summer/beach read, but don’t want to diminish it. I also predict that it will be standard fare in every backpacker hostel in Southeast Asia before very long.” Ah, that is one of my fondest wishes! This enthusiastic review by Danielle E. Alvarez on GoBackpacking, a site for independent travelers, would seem to head the book in the right direction.

But, man, it’s mostly looking to be a hard slog. I wanted to give away some copies of Currency to readers about to embark on trips, with the request that they would in turn leave the book where another traveler would find it. When Jeannie Mark from the well-designed, well-written travel blog Nomadic Chick contacted me about doing an interview,  I thought her site would be a great place to launch the traveling book idea. She loved it, and we designed a contest. Jeannie did a great job with the interview (which is here) and the promotion for it, but we received fewer entries than I had prizes to give away.  (Here’s what she had to say about that.) So, if it’s that hard to give-away a novel to an audience that it’s pretty much written for… sigh. (By the way, I’m still trying to get this idea off the ground. If you’re going on a trip soon and want a free copy of Currency to read and then leave somewhere, click here.)

Still, even if it’s an uphill climb, the internet makes networking with traveler-types easier than it would have been ten years ago. Emily Gerson at the site Maiden Voyage Travel just did a nice interview with me. I talked about publishing with small presses on travel writer Alexis Grant’s super-useful and professional writing blog. And I identified another site that hits my target audiences,  The Lost Girls, which is run by three women who quit their NYC media jobs to travel and blog around the world. (Their book by the same title came out around when Currency did. It’s at #3,382 on Amazon. Not that I’m counting. Not that I’ve noticed they have a list of national reviews on their Amazon page that’s as long as my arm.) I was grateful to see Currency‘s pretty cover and a good review on their homepage last week, right here. The reviewer is the only one so far who didn’t love Piv’s voice, but she was nice about it.

Not so nice was this review in Chicago’s NewCity Lit. I stumbled upon it just the other day, but I reckon some of my friends might have seen it and not told me about it.

Well, actually, I just reread it to post it here, and it’s not terrible. And, you know, I used to be the first to say that if reviewers give everything a sunny two thumbs up, then what’s the point. But I think I’ve changed my mind. It’s so hard to complete a full-length work. It’s so hard to get it published. To find an audience. And then you’re going to dismiss it in a couple of sentences? It might be preferable to say nothing.

On the other hand, today I learned that a review of Currency that was supposed to run in a national print publication got pulled. I can’t help but wonder if it got pulled because the reviewer couldn’t be entirely positive. Better no national press at all than that?

Whatever. Better this—a book in hand, people reading it—than nothing, of that I’m sure. The good reviews I received before the not-good one did help inure me, and I was fairly well steeled for the indifference of the majority: I knew a book by a first-time author from a small press wouldn’t be met with trumpets. I knew having a platform was important, and that I didn’t have much of one beyond my supportive friends (whose numbers, thanks in part to the book, are growing). It’s been a journey, a real journey, in the best sense of word. No matter how much you read about a place, it’s different when you visit it. No matter how much you prepare, you’ll be swept along on some currents you can’t control. I always feel lucky when I get to go on a trip. And if you liked the book and spread the word, that would make me happy, too.

← Freedom to Roam and Wrangle
Haven’t I Seen You Here Before? →